So I picked my bike up from VeloHeads after its service, and it feels great. Just like a new bike.

On the 2.8 mile trip back from the shop to Work, the bike felt good. A few days later, I decided to head out on a long ride, 21 miles it worked out to be. 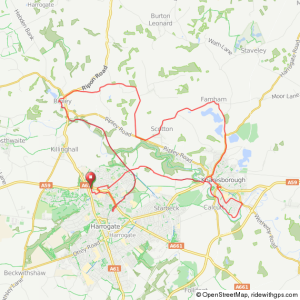 This route, I have called the Duck, as it somewhat looks like a sort of running duck thing.

It’s a good route, and I enjoy it. It has a good number of hills, which for me, are enough of a test of the legs, as well as a good portion of fast downhill sections.

Its a route I’ve ridden alot over the last few days. Two parts of this route however, do occur on fast roads, albeit short amounts, but they are fast, and often used by HGV’s. Ripon Road is the shortest, but worst. Traffic hurtling past at 60mph, luckily its a wide road up until your right turn onto Nidd Lane. Then its minimal traffic all the way back to the Ripley road. A nice fast downhill section here through Brearton, Then its back onto quiet roads through Scotton, and another fast down hill, before opening up on the Farnham straight, a flat section where a good cadence can see your speed keep high.

Finally head into Knaresborough and then back via the Beryl Burton Cycleway. I however try to avoid the Bilton lane section, as it is nothing more than a rough muddy collection of exposed brick and potholes. Something really needs to be done about this section. Its supposed to be a cycle route into Knaresborough, but it just lies there forgotten about.