So, this rattle that I’ve been chasing, while slightly better with a different wheel, is still there under certain conditions.

However, I have an idea it could be the Wahoo mount I’ve been using. So, I’ve swapped it for the Garmin mount while I try and work out what it is. I have cranked down in the Puck bolts, but will first see what happens with the garmin mount.

So, after a ride with just the garmin mounted, no noise. Nothing, not a damn rattle anywhere. I’ll give it a couple more rides to make sure, but it maybe cured.

So what is it about the mount I have for the Wahoo? Well, it could be a couple of things.

The Elemnt is a bigger unit, and heavy. So it could be moving, and hitting the handlebar clamp bolts as it sits very close to them. Which, I suppose could be the reason I went all out for a headset issue. Or it could of been the actual Puck on the mount being loose. I’ve really tightened them down. So if it does it after I refit, I’m likely to go down the route of it hitting the stem bolts.

The solution to that would obviously be a longer mount, like the k-edge. But I’m not really wanting to spend £50 on a mount.

My last post was about issues with the headset. I think I’ve cured that now, but onw of the symptoms was a judder under breaking.

I’d assumed this was the headset suffering from the forces of breaking. However, I was reading about brake judder and it got me wondering if that was the cause of the juddering.

Mounted the bike up in the work stand, removed the front wheel and cleaned both the brake track and sanded the pads down. I was putting the wheel back on, and by gently holding the brakes while spinning the wheel, I could feel a slight rubbing in a section of the track.

Looking closer at the rim, there is a chunk missing, maybe couple of millimeters, and that slightly catches the pads as they contact. That, could very well be the reason I’ve got such bad judder on breaking.

So I’ll fit my spare wheels for my next ride and see how they feel on the bike.

Hopefully, this will be the conclusion of this drawn out saga.

It’s been a few days of maintenance again. Mostly this time centering around the headset.

For a long while I’d had issues with the bearings coming loose, and causing headset knock. No amount of tightening would seem to cure it long term. I just could not get it tight enough to stay put. It was all down to the carbon steerer bung. Tightening the top cap would pull out the bung up, negating it’s very function.

I tried everything I could thing of to get it to stay in. Tightened it to 8nm, slipped. Added carbon paste, slipped.

This was with the factory bung. Which to be honest is pretty crap to start with, as it only expands at the Base. This puts less surface in contact with the steerer, and also causes a bulge. So that was pretty much consigned to the bin.

Nipping down to the local bike shop, they only had one in stock. 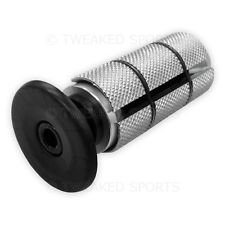 Worth a try for £7. Fitted it at 8nm. Still pulled out. This one had slight knurling on the barrel, but it was alot shorter, and had no lip on the top so would fall down the steerer tube, and was a complete and utter pain to install due to the three independent plates that pressed out onto the steerer.

On to wiggle and ordered a Deda version. This one arrived, unlike the Pro version, it had a lip, and was longer offering more support to the stem clamp, it was also more knurled.

So, bunged it in, did it up a fair bit tighter this time. And it didn’t pull out as much, allowing me to tighten down the top cap.

All seemed good on a quick 10 mile ride where previously it would give me grief straight off the end of the first down hill.

So time will tell if this is now cured.