So, I rode a route I hadn’t ridden in quite a while yesterday, and was interested to see my timings.

On one segment, I was beating my previous time by about 10 seconds, until the end of the segment, where the time ahead started to drift back down. And much to my surprise, I finished at exactly the same time as the previous PB. But when I looked on Strava, the times, where exact for each of my efforts over the years. What are the chances of that?

7 Minutes and 38 seconds, and its the slight uphill at the end of the segment that kills it for me. So, I need to try harder!

Using the compare tool on the segment page, I’m able too see I was faster all the way down to the base of the hill, then that gap really started to close in on me, before the lead just went.

I’ll keep trying the segment, and now I’m loosing more weight, I’m sure given time and effort I’ll be able to pull it back down to under my current PB.

The Single speed bike is badly unwell. A few spokes started to come loose, and pinging while riding, which also kicked the wheel out of true. Like a proper idiot, I tightened the spokes without thinking, and of course made the wheel a damn sight worse than it was. These are horrible wheels that came stock with the bike, and with a non removable freewheel. So instead of wasting time and effort on properly truing the wheels, I just decided to replace them and be done with it. A quick trip over to Santa Fixie, and a wheelset was ordered. Nothing special, but better and lighter than what I have. Maybe one day, I’ll buy a wheel truing stand, but I don’t have much, or any need for it apart from these cheap Chinese wheels. But I might save them for learning how to true and wheel build, which to me at least, is a dark art.

I’ve found a great website, so now when people doubt that extreme headwind, you can prove it..

Go on, connect up your Strava account, and have a look round.

I really thought that I might of got PB on this segment, but alas, I missed it by a second. One measly second. Oh well. I did however get a PB on the longer segment that this segment is part of, so that’s something at least. 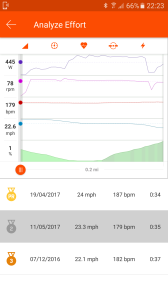 However, I’m hoping the cyclist that came off on the A61, which is a nasty road to ride is ok. I stopped and asked if he was ok, said he was but looked a bit shaken.

That particular stretch of road is really bad, national speed limit and lots of twists and turns, and with it being a route to the motorway system sees a lot of heavy traffic.

So, the strava blog recently made another post, this time outline something they are calling “Athlete Posts”. I noticed, after the endless negative posts the non chronological feed post got, they have not allowed comments on this post. Just proves they will be going forward with their plans, regardless of their user base.

A few select “Athletes” can now post to their timeline other things than activities. So, essentially turning it into a sport blogging site. In essence, this will mean that an advertiser can now be guaranteed a view number. It also means, to you and me, the cruft that shows up in your feed will increase. Dependent upon who you follow obviously.

In a spectacular fashion, strava has changed its news feed. Now, instead of chronological, it’s based on an algorithm where it decides what you want to see. And understanably, people are pissed.

In the feedback thread at strava, there is not a single positive post. In fact all the posts are vocally against this. I’ve already pretty much decided not to renew my subscription, this will proboly make me not even look at the feed.

They said it’s been a year in the design of this, in that year they could of been working on fixes for the feed the community has been crying out for, like filtering the useless junk out of the feed. But no, they seem intent on pushing forward with this.

I don’t think strava are bothered by the vocal masses. I think they are now looking at a new revenue stream, and that is sponsored rides, and advertising in people’s streams. They are trying to become the Facebook of the activity trackers. There fore not really fussed about people not renewing.

Could this mean strava goes to a free to use model? Possibly.

One things for sure, the non chronological feed just dos’nt work. And I’m glad of ridewithgps.com right about now. Sure it dos’nt have the social aspect strava has, but I’ve long since grown out of needing kudos, or beating Joe blogs segment time. The only person I need to beat now, is me.

I’ve been a loyal user of strava for years. But I’ve been thinking recently of dumping my premium subscription. Why?

Well, in all honesty, it just no longer fits my use requirements. I’ve never really used the segments, other than beating my own times. I’m not interested in bragging rights or KOMS. One of strava’s issues is that there will always people out there who will game the system to get the bragging rights. The leaderboard is knackered due to this.

Garmin recently brought segments to many GPS units. I used to use it, but due to a bug with the garmin firmware and the inability to set a default target it fell out of favour.

So what else is out there? Well, there are a few logging sites. None of them have the same pull as strava, but my current usage is Training Peaks and Ridewithgps.com.

Training peaks is arguably the grand father of them all. With no limits to the way you can view data, and the sheer amount you can do, it is the greatest at seeing your performance improve. But it can be a massive data overload.

Ridewithgps is simple, but powerful. With support for ride tagging, gear management and maintenance logs. It’s recently started to gear itself more toward clubs, but it’s still a great choice for lone riders who arnt looking for a social aspect, although it does offer that, but so far has failed to pick up the type of following strava enjoys.

And that’s what strava has going, the social aspect. It’s simply unmatched in that regard. And that’s why I’ll continue to keep a strava account, but not a premium. It just has no benefit for me.

Monday, I did a simple 14 mile route around Harrogate, and according to Strava, gained over 14 personal bests, 2nd and 3rd best times. Along with a couple of This years bests, and top tens.

Some of the best times I had where on the cycle path to Ripley from Bilton. There was a cyclist in front of me, by quite some distance. My competitive edge came out and I just had to catch up. They were going at some serious pelt, and took me almost a mile to catch them up. So that rider improved my time over that segment by quite a margin.

So yeah, I was quite chuffed. Then I got to work and that good mood was quashed quite quickly, but thats a different story..

It was a cracking ride. Tuesday, I did the standard out to Ripley before work, and again gained a good handful of Personal bests and 3rd place times. I normally ride up in the hoods, as the layout of my bike means that this is the easiest way to reach brakes and gears. However I put myself into the drops, initially I never noticed the difference. But on the Viaduct to Bilton segment, I saw my speed was up at around 16-17 mph. Normally, in the hoods its around 13-15 mph for the same sort of effort. That small change in aerodynamics made a huge difference. When I went back up into the hoods for a while to see the difference, the speed dropped down to 14 mph, and back into the drops it went back up to 16 mph. 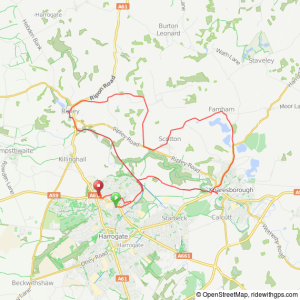 So all in all a good couple of days, and I think I’ve earned a rest day today, as my legs are grumbling a little.

The Ride I went on the other day before work, was a slightly damp one. I arrived at Ripley, in the cold Sunshine. It was a lovely day. Then, on the cycle path back, it poured down. But I enjoyed it. Cruising along the quiet path, all on my tod, the bike gliding along. The jacket I had on, kept me nice and dry. But the rain coming through the holes in my helmet was a pain..
Never Mind the rain though, I pushed on, and completed a 13.5 mile circuit to work. The only downside to this ride, was a dumb arsed Mercedes Driver, who thought getting stupidly close, and sounding his horn was a good idea. When he stopped at the traffic lights, I took pleasure in articulating my anger through his window, and thats not like me. But when idiots like that put my life in danger, how is one supposed to react?

Shame I never had the cameras on my bike for this ride really. I would of liked to of seen that back, just how close he came to my rear tyre.

But, my thoughts and sympathy with the cyclist, and his/her family that was critically injured on the same day in Harrogate.