I don’t much mind riding in the rain, its a refreshing change. But it can be miserable as pleasurable. Large cars and trucks throwing filthy water in all directions, hidden holes in puddles and low visibility.

The Monsoon type weather we’ve been having here recently has rather dampened my riding. My chain is currently dry lubed, which means any long distance in much more than a light rain will see me squeak along the road, and a noisy bike to me at least, is incredibly irritating.

But ride I must, so its out with the overshoes, and long sleeved jerseys and off.

Looks like the biblical rain we’ve recently had has gone someway to refilling the reservoirs.. 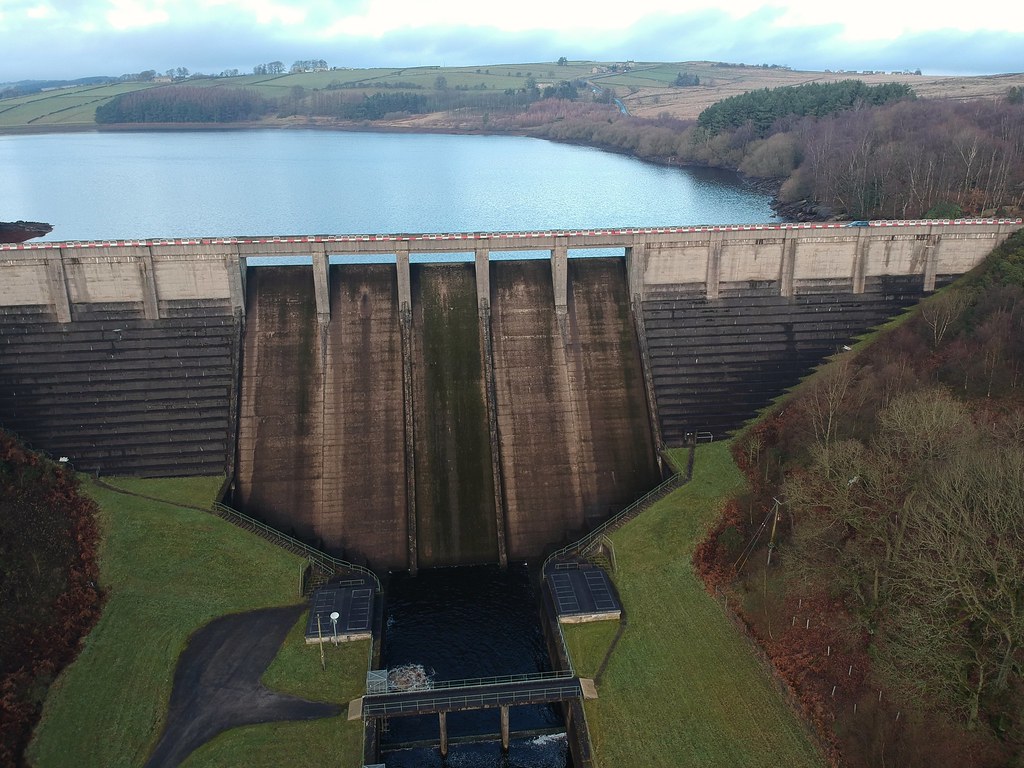 I’m surprised they’ve refilled this quick. Unfortunately, I could not see Grimwith, as I was up there, everything was choking on a layer of fog that was so thick, visibility was easily down to less than 10 meters.

You can see in these photos, the bottom image was taken at Thruscross, the top at Grimwith.

The Thruscross image, you can see the immense fog bank on the horizon.

It was like driving into a alien world, like an invisible border had been crossed. I’ll spare you the rants about drivers not having lights on.

But anyway, a few good shots had of Thruscross dam, some piloting experiences amoung the trees.

I do however want to get shots when this dam, and others are overflowing. Might need to wait a few more months for that though..

You know it’s bloody cold when you notice icicles hanging on your walk home from work.

The wind was lethal. It was cutting right through. I only hope we have seen the last of the cold eastern weather, as it’s stopping a lot of riding..

I’ve found a great website, so now when people doubt that extreme headwind, you can prove it..

Go on, connect up your Strava account, and have a look round.

Since the first time I went over on ice, I’ve always been a little hesitant to ride while icy is forecast. I’ve fallen a few times since this video, but it always sticks in my mind. Slow and careful is the order of the day when dealing with ice, especially like this

But it’s the ice you can’t see that’s truly terrifying, the first thing you feel is the rear wheel, or front wheel going sideways, at that point you know rescuing it is nigh on impossible, and you fall in an unsightly heap.

This past week, ice has been a major issue, along with slippery snow and slush meant that my weekly target had fallen well short. But I’d rather that, than have to deal with more falls.

So, with the weather as it is, scuppering any riding, I decided todo a full strip and rebuild.

So each part taken off, checked and cleaned.

Today’s ride was a short easy one, well apart from the wind.

It was a constant wind, according to the met office 25mph. And man could I feel it.

As always on the short route to Ripley and back, it’s a tail wind down Bilton Lane, headwind along the cycle path and a nasty sidewind/tailwind on the busy main road to Ripley. Coming back, and the wind was blasting me from the side and front, but back on the cycle path, it was a tailwind. It’s that moment, where you can’t feel the wind, it appears calm, apart from the leaves moving. It isn’t until you stop you feel the wind again.

Heading back off to Bilton Lane, dreading the headwind that I was bound to encounter going back up, I crossed the viaduct, and on. A couple where walking their scratty little dog off lead, and something told me that it was going g to wander. And surely enough it sauntered right in front. I stopped just short of its nose. And it just stood there, giving me a distainful look. With a muttered “sorry” the owners wandered off.

And back onto Bilton Lane. And there was my enemy, that wind. Bilton Lane acts like a giant wind funnel, and I’m battling through it. Half way up, and I’m averaging 300w just to try and maintain 10mph, even with me as compacted as possible to present a smaller area for the wind,  But eventually, the end was insight. With my heart feeling like it was about to burst I finally turned off into the shelter of St John’s church.

But then, another wind tunnel on St John’s road, before the mother of all headwinds on Skipton road. But home I was..

On leaving work the other night, the sky was a wonderful shade of red and there was a beautiful rainbow spanning the sky.

Its been quite awhile since I’d enjoyed the walk home. With all the shit happening, it was the world’s way of saying everything will work out.

I can handle most weather, be it rain, hail, snow or heat. But wind is my nemesis.

This ride was one of the worst for wind I can remember. It started as a tailwind, turned to a headwind, and then, just to test me, a sidewind on a busy main road..

It was a really windy couple of days here. Gusts up to 45mph, which to be honest, felt sustained rather than gusts.

I decided, as the wind had died down a little the next day, I’d head out for a quick ride. I wanted to get out the house, and check out the new new features on the Garmin 510, that have been released with Firmware 3.40. Namely the Segment support.

On the cycle path toward Ripley, I was having to avoid some rather large sticks, and parts of tree that threatened to enter the spokes and throw me if I went anywhere near. The I rounded the corner and saw the casualty of the wind.

A rather large conifer had fallen right over the path, blocking it all. the only way round was to pick the bike up and walk round it cyclocross style.

At times I was having to lean at quite an angle to deal with the wind. It was pretty much a headwind all the way to Ripley, and quite a struggle to keep a half decent pace going.

On the way back, the effect of the wind was dramatic, as it was pretty much a tailwind for parts, effort was’nt really needed to move forward at  a pace that saw me get some good times according to the new feature on my Garmin.

My best previous time was set on the 23rd of December at a time of 10:41. Today it was some 23 seconds quicker, at 10:18. Even having to get off the bike, and carry it round the downed tree I was so much quicker, mostly due to the tailwind I had.

Heading back up Bilton Lane however, was a whole different story. The wind only ever comes one way, and thats down. With a side wind when you pass a gap in the houses. It was impossible to keep any speed up, or a central line as I passed the houses. It was virtually impossible. It was pretty much my worst time ever on the Lane. The wind was just vicious. It was at this time, I decided enough was enough and gave up, and headed home.

But on the bright side, the new features on the 510 worked very well, and the segment support is excellent.