Just a short ride today. My motivation of late has been lacking.

I thought the Cycle path may of been busy, with it being a bank holiday, and the Bilton Gala, at least on the way out.

On the way to Ripley, I was overtaken by a guy on a trek bike that was making an awful noise. His drive chain was grinding away sounding like it was about to implode at any moment. 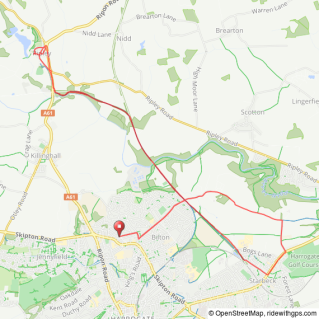 Following him for awhile, half expecting to be showered in pieces of rear derailleur detritus, I managed to set a new PB on a segment, achieving a time of 4:50.

On the way back, my front derailleur again refused to move up into the large ring, losing me a chunk of time, and something to sort out when I get back home.

I decided again to heft it up a short climb at the end of the cycle path, locally known as Gardners Hill, due to the pub at the bottom. When I was critically unfit this short hill would kill me, and I’d fail to even get a quarter of the way up it. But now, I can due it in under a minute. (Yes, it really is that short)

Back on the cycle path at Starbeck I swore and cursed at my derailluer to get its act together and move into the big ring, it steadfastly refused to move the chain. So a brief stop to again change the cable tension got it back in. But now, that barrel adjuster had reached the limit of its acceptable travel, but at least I had a working big ring. So it was a small test ride down to the Nidd Viaduct, and by now, the path was so busy with people.

And finally back home to sort out the issue with my front shifting.